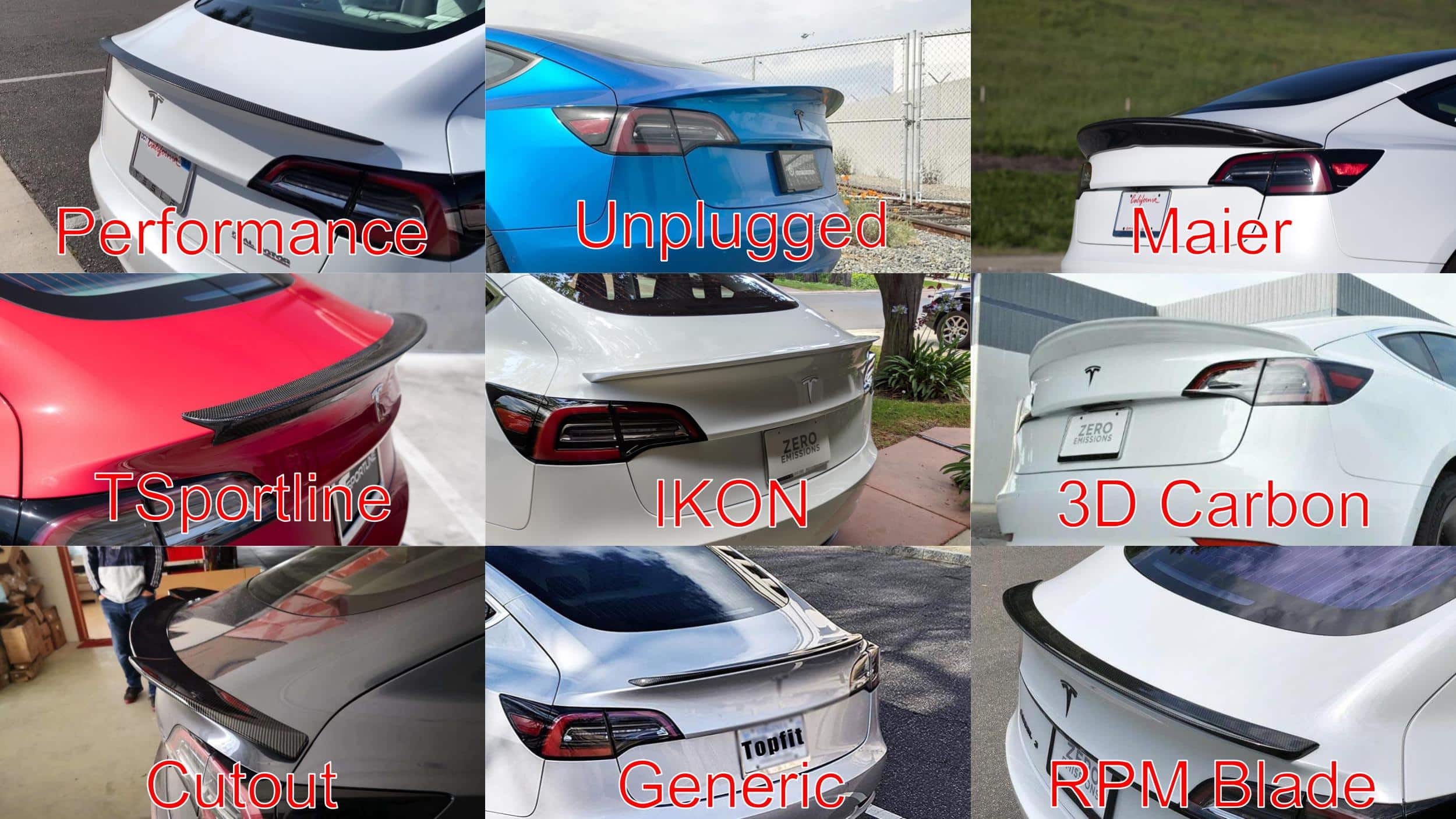 When I was looking for a spoiler for my Model 3, I found more options than I expected and widely different prices sometimes for what appears to be the same thing. These are in no particular order since what’s best for you really depends on your preferences for aesthetics, performance, and budget. All the options can get quite confusing, so here’s our guide to the top nine spoiler options for your Model 3.

Tesla has a spoiler that comes on the Performance Model 3, well eventually anyway. It appears to be real carbon fiber and it wraps around where the edges stop just short of the trunk lines here.

It attaches both to the top and the back of the trunk, has a pretty flat profile, and has a gradual taper as it reaches the edges. I’ve read that Tesla has a price of $660 for them, but I couldn’t find where anyone has been able to purchase one, probably because there’s still a waiting list of owners who haven’t gotten them yet. I’ve seen them selling on ebay in the $200-$300 range if you search by the part number.

UPDATE: Some well-reviewed clones are now available like this one from SUMK on Amazon.

Unplugged has an interesting option available for pre-order right now. It’s also carbon fiber and it wraps all the way completely around the trunk and has a very flat profile almost parallel to the top of the trunk. They make some impressive claims about efficiency improvements and appear to have the data to back it up, so pretty cool, but pricey at $695.

Maier Racing has a couple options along the same lines as unplugged where they both wrap completely around the trunk, but where Unplugged is almost flat, these angle up quite a bit. There’s a 4″ or massive 7″ deep option for $899 and $999.

TSportline’s spoiler also attaches to the top and back of the trunk. It’s carbon fiber and looks to be the narrowest option available – you can see it’s not much wider than the back glass.

I’m pretty sure I remember this one priced at $700 before, but it looks like they’re at $499 now for gloss or matte finish. I also found what appears to be the same spoiler sold under the not-so-subtle name JC Sportline for $299, though only in glossy. RPM seems to sell the same thing also and they call it TRIMLINE.

IKON motorsports is what I bought and I really like it. For the price, I was surprised that it looks to be real carbon fiber, but I had it painted to match my car anyway. It’s a bit wider than the Tesla spoiler where it reaches just past the trunk lines here.

Compared to the performance, it only attaches to the top, doesn’t wrap around the trunk lip, and doesn’t have the gradual taper at the ends. They are available on Amazon or ebay. If one is sold out, check the other. It cost me $100 to get it painted, but that’s optional and prices will vary.

The 3D Carbon spoiler is pretty chunky and it’s interesting that they call it 3D carbon when it’s not made from carbon fiber. It’s tall and wide and reminds me of the spoiler from a Dodge Viper. They’re on ebay for $260 unpainted or $330 painted, which is cool to have that option.

This one looks to be a variation of number 6. It has very similar chunky edges, but they got fancy in the middle with a cutout section. I’ve seen it on ebay shipped from China from $140 unpainted.

I call this one the generic China spoiler. These are are all over Amazon and ebay under many different names and prices. They’re pretty narrow like the TSportline, but only sit on top the trunk and are pretty thick. I’ve seen them as low as $160 shipped from china or around $200 shipped from the US.

When I checked out the RPM blade in person I wasn’t too impressed with the wavy surface finish, but it has been out a while and is pretty popular. It’s kind of in the middle in size, wider than TSportline or generic, but not as wide as the Performance or the IKON and it only attaches to the top. It’s around $270 shipped.